The eyes are the main focus of the face. That is why there are so many treatments targeted around the eyes – successfully rejuvenating the eyes immediately takes years off a person. However, at the same time, the eyes are the amongst the most difficult to treat. The skin is thin, making the area very unforgiving to fillers. Wrinkles and lines are very prominent and difficult to erase. Treat too little, and the results will be unsatisfactory. Treat too much, and the eyes may end up looking unnatural.

Botox has been used to treat the upper face and eye area for more than a decade. Initially used to erase wrinkles off the sides of the eyes and between the eyebrows – the crow’s feet and the glabellar frown lines, doctors then realised that Botox could also change the way the eyebrow looked.

A Fragile ‘Ecosystem’ of Muscles

The shape of our eyebrows is determined by the various muscles which pull on it. An delicate balance exists between the elevators and depressor muscles of the eyebrow. Skilful manipulation of these muscles with Botox allow us to alter the shape of the eyebrow. At the same time, lifting the brow allows the eyes to appear larger as the skin sagging which occurs with age (known as hooding) is lifted.

The Ideal Brow in Men and Women

You may think that the eyebrows are a mere insignificant collection of stray hairs above the eyes, but they do a lot more. The eyebrows bring focus to the eyes, and accentuates the sexuality of a man or woman.

A lady’s eyebrow is neater and narrower than a man’s. It is tilted slightly upwards as it travels laterally. The brow then curves downwards gently towards the outer third of the eye to delicately cradle the eye aperture.

Studies have shown that both men and women find women with an arched eyebrow to be more attractive. The reason traces back to our evolutionary roots – during fetal development and puberty, women who are exposed to more estrogen have more arched eyebrows. Our preference for the feminine arch is a reflection of our primal desire to find a mate who is more likely to bear the healthiest offspring.

How about men then? Naturally, a man’s brow is thicker and more bushy. A man’s brow is ideally low set, with a small brow to eye distance.  But the main difference is in the shape of the brow. A masculine eyebrow is ideally straight and not arched. It may even tilt slightly downwards. Some degree of hooding is acceptable in a man.

Studies have again shown that people find eyebrows which fit the above description in a man more attractive. An overly ached or tilted eyebrow in a man feminizes the face.


The Botox brow lift is not a new technique. Doctors have been performing the treatment on millions of women all over the world. However, the treatment is not without its pitfalls. Often, doctors overdo the arch, causing women to to look perpetually ‘surprised’ or ‘angry’. In severe cases, the eyebrows are so tilted that they are described as being ‘Spocking’, named after the character from Star Trek. Another common problem is the depression of the medial brow. This happens when too much Botox is used to relax the middle of the forehead, resulting in a  very heavy look (think Nicole Kidman). The eyebrow is tilted to achieve the arch, instead of being lifted.This is again undesirable.

Fortunately, with advancement in injection techniques, the dreaded spocking and frozen heavy forehead can be avoided. By carefully injecting only at the exact sites, we are able to cause the entire brow to lift, and create a gentle curve at the lateral edge – a true brow lift to achieve the sought after ideal brow.

This patient was ecstatic after her Botox brow lift procedure. If you look at the before and after picture, you can see that her eyebrows are lifted significantly, producing a gentle curve which gives more focus to the eyes. In addition, her eyes are now bigger, as the overlying skin is pulled back to increase the eye aperture. A simple procedure has made her eyes brighter, bigger, and much more feminine.

I perform my injections significantly different in men, carefully placing them such that the eyes are not feminized. A brow lift is still possible, but it has to be done without the upward tilting of the eyebrows. In fact, I often place my Botox in a way such that the eyebrows tilt downwards after the treatment. I feel that doing that makes a man look more approachable.

If you do not believe me, you can check out my own photos. Notice the subtle straightening of my eyebrows in the photo below. Don’t you agree I now look more friendly compared to years ago?

Botox is a formidable instrument. In the right hands, it will make you look fresher, more youthful, and more feminine or masculine. Starting with the eyes and the eyebrows, Botox, when performed skillfully, will work wonders on the way you look! 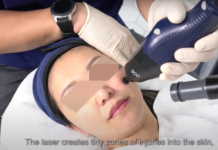