The world is hit by yet another beauty fad from Korea: The Aegyo Sal (“cute muscle”) – a bulge under the eyes which is believed to make the eyes look better.

Beauty trends are always changing.
Just awhile ago, I used to have patients coming to me, complaining of “puffy eyes”.  Unknown to many, this “puffiness” many  young women had was in fact a muscle under the eye – the pre-tarsal part of the Obicularis Oris. In these people, the muscle was larger than usual. Being a muscle, the condition was very responsive to a tiny bit of Botox injections.

Back then, face readers had a different view: They believed the pre-tarsal muscle, which they coined the “cocoon”, was a sign of sexual virility! The bigger the “cocoon”, the higher the sex drive. And then the Edison Chen sex scandal came out into the open, and face readers gleefully exclaimed: “I told you so!”

Virile or not, many people did not like this “sausage” under the eye, thinking that they looked like eyebags, making them look tired. But since then, things have changed dramatically. A new trend in Korea, started a few years ago has now hit the world with full force – young men and women are trying to create this “sausage” under their eyes, as it is believed to make the eyes look more youthful, larger, and more friendly when they smile. They even coined the term “Aegyo Sal”, which loosely translates to “Cute Skin”.

There is some truth to this claim – the pre-tarsal muscle is often only found in younger men and women, and it decreases in size with advancing age. The muscle also shows itself more only when we smile – hence the association with friendliness (and cuteness). 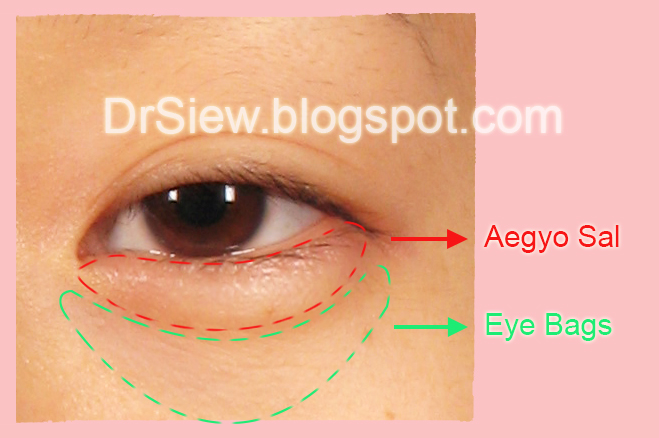 Media reports often say that young men and women are now trying to get “eye bags” to look younger.While both the Cute Muscle and the Eye Bag are located very close together under the eye, there are some very important differences.

Eye bags are in fact collections of fat which has protruded through the Obicularis Orismuscle, creating a bulge in the Tear Trough area. It occurs in older people, due to the effects of gravity and weakened muscles. The highly sought after Aegyo Sal is higher up in position than where the eye bags usually lie – right below the eye, where the lid and skin merges. As mentioned earlier, Aegyo Sal is in fact a muscle, and a dynamic one – which becomes more obvious when you smile.

How to Achieve Cuteness With Aegyo Sal

So you decided that you want in on the latest beauty trend, and would like to have some Cute Muscle too.. When there is demand, there is innovation and supply! Hence, there are many ways you can get Cutified, ranging from non medical, to injections, to surgery. This instant Aegyo Sal draw on in the picture on the left is available at Etude House, although I am pretty sure you can use any white and black eyebrow pencil get similar results. One other innovative way, which bloggers swear by, is to use tiny strips of plastic to fix the skin under the eye, creating a temporary bulge above the tape. Together with highlighting makeup (and a whole lot of skill), the results can be natural and very cute. (The manufacturer of the strips may want to learn how to spell properly though) Injection of Hyaluronic Acid fillers in the pre-tarsal area to create Aegyo Sal has become an extremely common procedure in Korea.  The procedure is fast, relatively painless with little downtime, and lasts for a year or more.

The procedure is safe, with side effects being mostly temporary such as mild swelling and bruising. One common problem is asymmetry if different amounts of filler is injected on each side, but this can be avoided if the doctor injecting is experienced.

We prefer to use Restylane for creating Aegyo Sal as we find that it gives the best, most natural looking and predictable long lasting results.

For people who wish for a more permament effect, plastic surgery options are also available. Aegyo Sal can be created via injection of harvested fats from other parts of the body, then injecting it just under the lower eyelashes, or inserting artificial tissue, called allogenic dermis in the same area.

Is Aegyo Sal Here to Stay?

We really do not know. At present, it is considered an integral part of the youthful, Korean look, so it looks like the “Cute Muscle” will be a feature we will see for awhile. But as all things, moderation is the key. Aegyo Sal only looks good if the under eye skin is taut and wrinkle-free. Attempts to manipulate already weather-beaten undereyes often turn out less then desirable.

A little Aegyo Sal looks good, but too much of it becomes distracting, and draws attention to it rather then the eyes as a whole. I personally feel many Korean actresses have gone overboard, going after bigger and bigger Cute Muscles – they do not look cute any more, they become enormous, out-of-proportion sausages which make them look tired instead!